IS WALKING OFF THE PITCH THE BEST WAY TO TACKLE RACISM?

Racism in football is the abuse of players, officials and fans because of their skin colour, nationality, religion or ethnicity. Some may be targeted (also) because of their association with an opposing team. However, there have been instances of individuals being targeted by their own fans.
Racism in football is as old as the game itself. The world have witnessed many cases of Racial abuse in different part of the world. Below are some examples 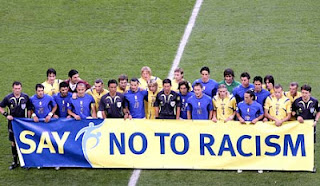 Belgium
Oguchi Onyewu, an American of Nigerian descent, has been punched and shouted at by racist fans while playing for Standard Liège. He's also had incidents with other players, such as Jelle Van Damme, who, according to Onyewu, repeatedly called him a "dirty ape" during the 2008–09 Championship playoff,
even after Onyewu relayed the information to the referees. Van Damme denied the accusations following the match, and claimed that Onyewu had called him a "dirty Flemish".Approximately two weeks later, on June 2, 2009, it was announced by Onyewu's lawyer that he was suing Van Damme in an effort to end on-field racism in European football.

France
In January 2005, as part of an anti-racism initiative in the French league, Paris Saint-Germain's players wore all-white jerseys and the opposing RC Lens players wore all-black during a French league match. The move backfired as racist elements among PSG's crowd in the Kop of Boulogne sing "Come on the whites." The racist overtone was backed up with monkey chants from the Boulogne crowd when Lens players touch the ball.

On 18 April 2007, Lyon player Milan Baroš was accused of racially abusing Rennes' Stéphane M'Bia by implying that M'Bia smelt. On 4 May 2007 Baroš was found guilty of the gesture, but found not guilty of racism, and was banned for three league matches.

On 17 September 2007, Libourne's Burkinabe player Boubacar Kébé was abused by fans of Bastia; he was red-carded for retaliating. In February 2008, Bastia was again at the centre of controversy when their fans unfurled a racist banner, again aimed at Kébé, which delayed the kick-off of the match by three minutes.

On 17 February 2008, Abdeslam Ouaddou of Valenciennes was racially abused by a fan from opponents Metz; Metz and the French league announced that they would be suing the fan in question. The match referee did not see the incident, and so booked Ouaddou for challenging the fan. Valenciennes chairman Francis Decourrière later demanded that the match be replayed, "in front of children from Valenciennes and Metz." Following this incident, the French Football Federation made steps to introduce harsher punishments.

In March 2008, Bastia's Frédéric Mendy claimed he had been racially abused by Grenoble's fans.

Black footballers playing in the Serie A top flight in 1992–1993 were also racially abused. Two black Dutch players, Ruud Gullit and Aron Winter, have spoken out against such racist taunts. Their complaints spurred a day of action on 13 December 1992, with the slogan No al razzimo! (No To Racism) being paraded by all players in the two Italian divisions.

Paul Ince also complained about open abuse during his spell with Inter Milan in Italy between 1995 & 1997.

On 27 November 2005, Marco Zoro attempted to stop the Messina–Inter Milan match by leaving the field with the ball, after being tormented by racist taunts from some Inter supporters. He was eventually convinced to keep playing by other players, notably by Inter's Adriano. These facts then brought strong and unanimous condemnations by the whole football community within Italy, and even a 5 minute delay for an anti-racism display for all the matches to be played in the next week in the country. The actions of the Inter supporters were also brought to the attention of the European football governing body UEFA as well as that of the European Union.

On April 2009 Inter Milan's Mario Balotelli, an Italian footballer of Ghanaian descent, was subjected to racial abuse from Juventus fans. They were handed a one game home fan ban as a result. In Euro 2012, he fell victim to monkey chants during a match against Spain.  These monkey chants have been heard throughout Europe to express racism towards African Americans. Mario was substituted out of the game as a result of the chants and the frustration he was revealing.During the English Premiere League match, Manchester City vs. Stoke City, Mario Balotelli was again forced racial slurs. A Stoke city fan yelled, "You're dirty, take a bath", and also was heard calling him a black monkey. The Stoke fan was banned for three years.Surprisingly this ugly act of racial abuse don't only happen in Europe. A case was reported in Zambia where the owner of Lusaka Dynamos, Hanif Adams was subject to racist abuse due to his Indian heritage while running for the Presidency of the Football Association of Zambia.
This ugly act which is gradually creeping in as a part of the modern game has since been giving Football governing bodies a lot of problem to tackle. A lot of groups have been formed to help create awareness on the evil of Racism in football. One of such group is the "Stand up Speak up"
Stand Up Speak Up is a Europe-wide campaign that was launched in January 2005 by the French Football player Thierry Henry following an increase in reports of racist incidents in football across Europe. Together with Nike and other top European players, he protests against this continuing problem inviting football fans to voice their opposition to racism.
The symbol of the campaign is two interlocked wristbands, one black, and one white. About 5 million of these wristbands have been sold all over Europe. The wrist bands are no longer being sold and there is no intention to reproduce them. All the funds raised are passed on to a central Stand Up Speak Up fund that will look to support initiatives that aim to combat racism in football through a variety of programmes and initiatives, that raise awareness, challenge behaviour and strive to change attitudes. This successful campaign included footballers such as Thierry Henry, Rio Ferdinand, Wayne Rooney, Cristiano Ronaldo and Adriano.
Although all this groups are spring up every now then, many players who have been subjected to racial abuse claims this groups are formed just for commercial purposes especially on the part of companies who produces the T-shirt, banners and stuffs like that and not their anti-racism stance.
And for that reason many players are beginning to take the issue very personal and vowing to do everything they can to see that this issues is eliminated from football.
Many of such players is Reading Jason Robert who said "there has to be a "true zero tolerance" policy to racism in football."
Recently A friendly match between Milan and the fourth-tier club Pro Patria was abandoned on Thursday after players walked off in protest at racist chanting from fans.
The game, played in Busto Arsizio, was called off after 26 minutes when a section of Pro Patria supporters targeted Milan's Kevin-Prince Boateng, who reacted to the abuse by picking up the ball and kicking it at the crowd in the stand behind him.
The Ghanaian then tore off his shirt and walked off the field at the opposite end. On his way, he applauded other sections of the crowd, who then appeared to react angrily towards the corner of the ground from where the chants came. 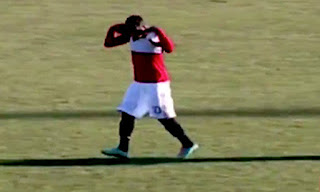 Pro Patria's Dario Alberto Polverini attempted to talk to Boateng as the 25-year-old departed, but the midfielder carried on walking and the rest of the players, led by Milan's captain, Massimo Ambrosini, followed him off the pitch. Urby Emanuelson, Sulley Muntari and M'Baye Niang were also reportedly targeted.
Boateng later tweeted: "Shame that these things still happen... #StopRacismforever",
And since them many other Soccer players seem to strongly stand behind him for taking such decision to walk off the pictch.
Ambrosini told the newspaper: "We were annoyed from the beginning. We wanted to give a strong signal … we could not continue the game in an atmosphere like this."
Manchester United defender Rio Ferdinand wrote: "If the stories about KPB walking off the pitch with teammate's after being racially abused are true, fair play to him."
Manchester City's captain, Vincent Kompany, wrote: "Act of racism against Boateng during Milan's friendly. How about becoming extremely intolerant towards racist idiots? They need to be told. I can only salute Milan's decision to leave the pitch."
Anti-racism campaigners praised Boateng's decision to walk off. Piara Powar, the executive director of the European anti-discrimination group Fare, said: "We salute Kevin-Prince Boateng for his actions and his team-mates for their support. This is the not the first time a player has walked off in Italy – if the situation continues it may not be the last. Italy, as much as any country in Europe, has a serious problem of racism to deal with. Football infrastructure is in need of renewal and at serious odds with the changing nature of Italian society. We look forward to strong action by the FIGC [Italian FA]."
With all this praises being showered on Prince Boateng and the failure of World Soccer governing bodies to tackle the issue of racism in Football, one will not be wrong to ask "Is walking off the pitch the best way to tackle Racism in Football?  Follow @soccer4life133
Posted by Gerald Mbonu at 10:14 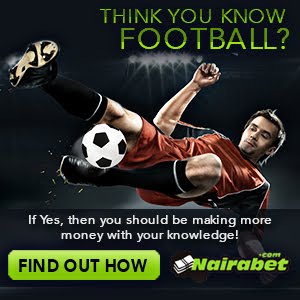 Buy your Jersey at a discount price. 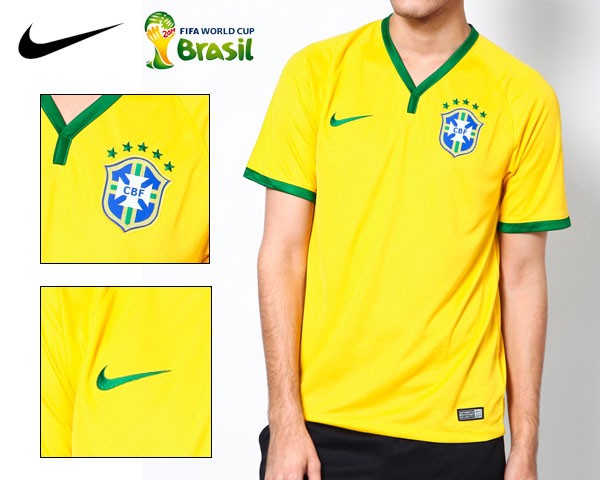